Colorize is currently a much discussed feature of Google Photos. Using AI, Colorize will automatically convert black and white images into colour images. The feature has already been announced at the Google I/O 2018. In May 2019, Google Photos product director David Lieb revealed first insights of the Colorize feature on Twitter. Lieb tweeted that he and his team are hoping to go into beta soon, but without further details on when we can expect it.

In early October, Google released the latest version of the Google Photos app for Android (version 4.26). Which, among other new features, includes a first test version of the Colorize feature. The 9To5Google team was the first one to show screenshots of Colorize in action. Others followed quickly. 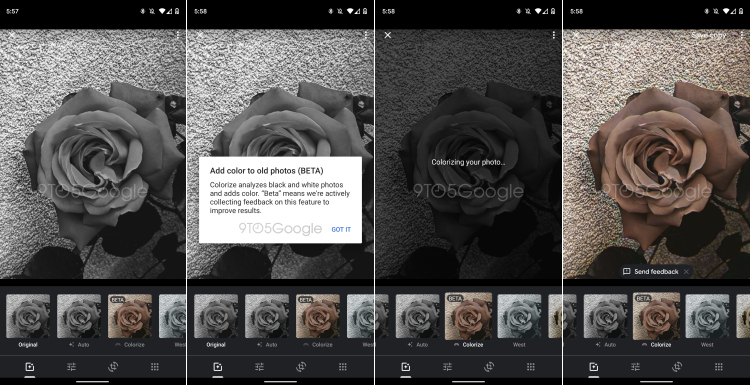 To use the features, the image must first be uploaded to Google Photos. Black and white images are automatically detected and Colorize shows up as a filter within the photo editing menu, currently marked with a “BETA” tag. A pop-up message informs that Google is “actively collecting feedback on this feature to improve results.” After a brief analysis of the picture, Colorize converts the black and white image into a colour image, which can then be saved. First user feedbacks show promising results. Currently, the feature seems to tend towards an older vintage look and works better with human subjects.

At the moment the test version seems to activated only for a limited number of users. We’re curious when the Colorize feature will be available to all users.