Natural image retouching – How much is too much?

Digital image editing and image retouching is standard today. A picture is hardly published without previous editing. Especially in the field of beauty retouching. In principle, there are no limits, (almost) everything is possible. Decisive is the desired visual statement. To achieve an as natural result as possible, it is important to find the right amount of post-processing for each image. Because too much editing quickly has a negative effect on the picture. And these poorly retouchings are quickly exposed and publicly criticised. The increasing online presence, be it the own website, the own online shop, Instagram or Facebook account, makes immediate reactions and discussions easily possible and open to everyone. But how much is too much?

The Change: Trend to authenticity

Images of beautiful, seemingly flawless people are presented to us everywhere. Very often, however, these images are retouched too much, whether successful or not. This includes supposed little things, for example teeth that are too white or skin that is poreless. But also massive changes, such as impossible body proportions. This has consequences for the image effect. Instead of improving an image through retouching, it seems unnatural and fake.

Such images show a distorted reality and create unrealistic expectations, to the female body for example. And result in public criticism and ethical debates more and more often. Especially young people are quickly influenced by the supposed ideals, which are impossible to achieve. But a change is in sight. For some time the trend has been towards more authenticity and a natural look. People want to identify with what they see. The focus is therefore increasingly placed on so-called body-positive marketing, the sensitive handling of retouched images to strengthen a natural and diverse body awareness. 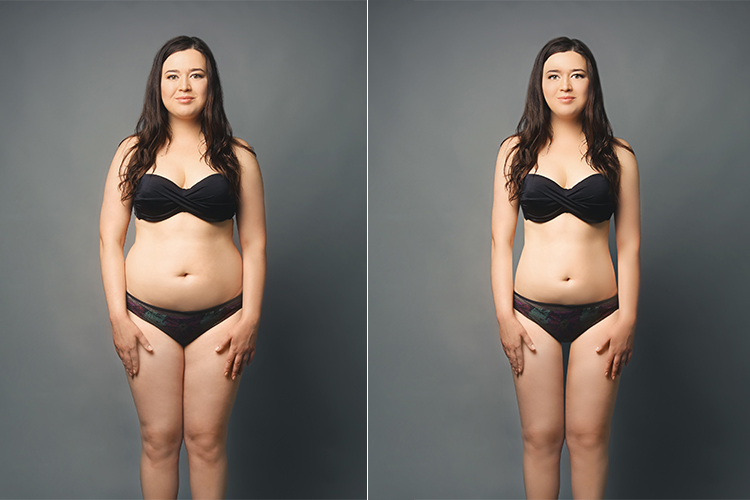 More and more companies are limiting the use of Photoshop and retouching. And use this change in thinking to show responsibility, to strengthen their own image and to gain the trust of their customers.
Just a few examples: The American fashion label American Eagle Outfitters forbears from using dramatic retouching in their campaigns. In 2017, ASOS, a major fashion retailer, showed underwear and swimwear on unretouched models. For years, the cosmetics company Dove celebrates the diversity of women with its “Campaign for Real Beauty”and questions stereotypical beauty standards. In January of this year, CVS (a major drugstore chain in the US) announced that they will no longer use retouched photos for their beauty campaigns. In France, there is even a “Photoshop law” since October 2017, which dictates the labelling of digitally retouched photos in the commercial sector.

If retouching, then it should be as genuine, natural and therefore unique as possible. And increasing sales show that people want to see exactly this. A natural look on the one hand, breathtaking images on the other hand.

A natural image retouching requires a lot of sensitivity. As in many cases, “less is more” applies here as well.
During the process primarily, momentary, non-permanent features are retouched. Blemished skin, flying hair, scratches, dirt, redness, irregularly tanned skin, goose bumps, uneven make-up … These are all features that exist only temporary. As well as wrinkled clothes, light reflections or lightened or darkened areas. Their editing or removal during post-production is not a fundamental change. Also minor cosmetic changes (for example, slightly lighter teeth), unless exaggerated, are usually compatible with a natural overall impression. Despite retouching, the pictures still look authentic and natural.

For permanently existing characteristics, however, it should be carefully considered whether and to what extent retouching is done. During classic skin retouching, for example, usually any irregularities are removed and the skin is evenly smoothed. Also enlarged eyes, raised cheekbones, extended legs, flattened curves, removed wrinkles, freckles and moles etc. are among the drastic retouching. Such fundamental changes quickly look unnatural and wrong. And instead of improving the image, the retouching only distracts and is perceived as negative. That should be avoided at all costs.

Natural images with which the viewer can identify. Such images leave a positive impression and create trust. And digital image editing and retouching are important, additional tools to create perfect images. Professional image retouching, expert knowledge and sensitivity – with us, your your images are in good hands.