Adobe is planning to launch a full version of Photoshop for Apple’s iPad. Adobe’s CPO Scott Belsky confirmed to the business magazine Bloomberg the development of a cross-platform Photoshop edition.

“My aspiration is to get these on the market as soon as possible, …” Belsky said in an interview.

The announcement is expected in October at the annual Adobe MAX conference, the launch of the app sometime in 2019.

Update 04.11.2019: Almost a year after the first official announcement, the wait is over: Photoshop for the iPad is finally here. At the MAX conference 2019, Adobe introduced the first version of the app, which already includes several tools for the most important Photoshop workflows: Composing, retouching and masking. More will follow. A summary of all Photoshop news is available in Adobe’s blog post. All about Photoshop’s new AI-powered Object Selection Tool also in our blog.

Update 17.10.18: Now it’s official. On Monday, Adobe gave first insight into the new Photoshop version for iPad at this year’s MAX conference in Los Angeles. Adobe left open, when exactly the release can be expected. But it should be ready in the course of the next year. Click here to get to the Adobe Blog for more details.

Exciting, but not surprising news. The move is part of Adobe’s long-term strategy to make all its products compatible across multiple devices. Since 2012, Adobe has shifted all of its services into the cloud and transformed its creative software into a subscription-based model. 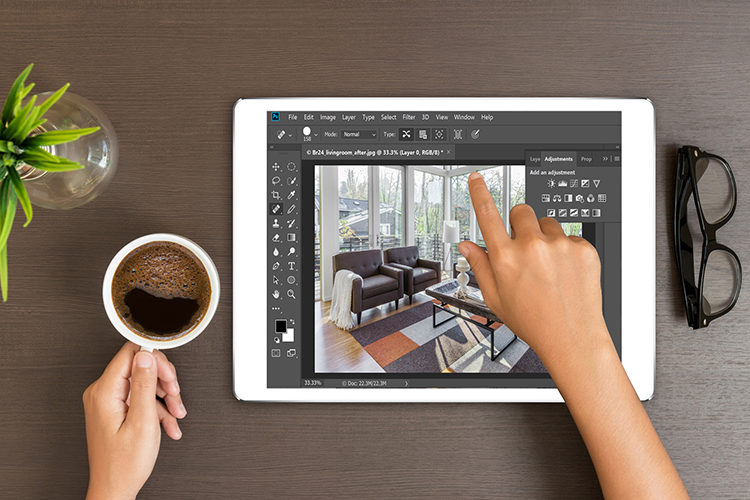 With Photoshop Express, Photoshop Fix, Photoshop Mix, and Lightroom Mobile Adobe already offers photo editing software specifically for mobile devices, including iPad. However, these simplified versions do not come close to the full versions in terms of quality and features. Competitors such as Affinity Photo used this to bring their own image editing apps for the iPad. On other mobile devices, such as the Microsoft Surface Tablet which runs with a full Windows 10, the desktop version of Photoshop is running. The approach of Adobe is therefore understandable.

Users are likely to enjoy the developments as they bring many benefits and support a continuing trend. More and more people prefer working on mobile devices. With a full iPad version, they can edit and retouch their photos and projects wherever and whenever they want.