Adobe is well known for software such as Photoshop, with which photos can be edited and manipulated. Currently the company is planning a full Photoshop version for iPad. Now Adobe announced that they are currently working on a project that will do just the opposite.
Adobe uses machine learning and artificial intelligence (AI) to identify distorted and manipulated images. Based on data of thousands of manipulated photos, the Adobe AI is trained to figure out and mark image manipulations.

When an image is altered, it always leaves traces. Adobe’s AI uses various techniques to search for artefacts of these modifications and irregularities. Such as minimal deviations in the image noise. So-called noise patterns in images are often unique to cameras, sensors or photos and are disrupted by editing. At the same time it looks for changes in the red, green and blue colour value of pixels. This can be used, for example, to detect whether pixel areas with exactly the same colour pattern reappear at a different location in the image. What would take hours manually, the software manages within seconds according to Adobe.

The AI is trained to look for three types of manipulation.

– Cloning or copying, when objects are copied within an image and used again at another position.

– Merging or splicing multiple images or image elements into a new image.

– As well as removal of objects from an image and corresponding retouched image areas. 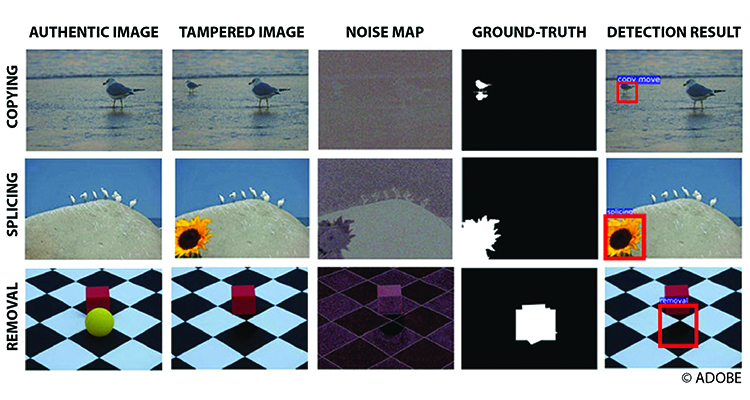 In many areas, image editing and manipulation is common practice. For example photography, art, e-commerce, advertising, marketing or printing. Here, image retouching, colour correction, clipping, composing, and more are usually used without any problems for the majority of images.
In other areas and situations, however, the manipulation of images is problematic. For example, in photojournalism, photos of politicians or celebrities, or images that are used by law enforcement. Again and again, manipulated and fake pictures also appear in the discussion about so-called “fake news”. And modern image manipulations are getting better.

Adobe itself notes that the technology is currently not perfect, but has great potential. We are definitely looking forward to the further development and use of this software. Of course you will find the news our blog.