TikTok is paving its way into social commerce with the expansion of the partnership with the e-commerce platform Shopify. Both companies announced the new in-app shopping feature called “TikTok Shopping”, which will give TikTok users a new way to shop and merchants a new channel to reach consumers. 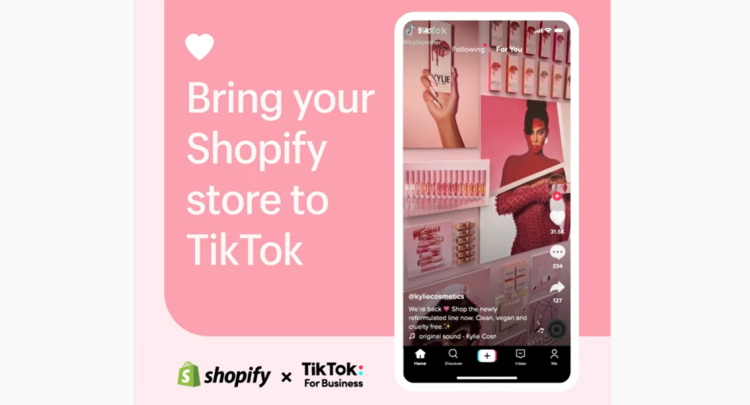 “Today, we’re unveiling an expanded partnership with Shopify and pilot testing TikTok Shopping among a select group of Shopify merchants in the US, UK, and Canada in the coming weeks. TikTok Shopping will bring new features that help Shopify merchants create engaging, organic content that sends consumers directly to their online store for checkout, making it easy for people to explore and buy the products they discover on TikTok.” announced TikTok in a press release.

TikTok Shopping lets Shopify merchants with a TikTok For Business account add a shopping tab to their TikTok profile and sync their product catalogues to the app.

“For the first time, Shopify merchants with a TikTok For Business account will soon be able to add a shopping tab to their TikTok profiles and sync their product catalogues to create a mini-storefront that links directly to their online store for checkout.” as announced by Shopify.

The new feature also involves product links that Shopify merchants can use to tag products in their TikTok videos. “Shopify and TikTok have also partnered to bring product links to Shopify merchants, which can be used to tag products in organic TikTok posts. The TikTok community can choose to shop directly from the merchant’s storefront or click a tagged product in a merchant’s TikTok video, which will take them to the merchant’s online store for checkout.”

Kylie Cosmetics, a beauty brand owned by Kylie Jenner, is among the early adopters of the new TikTok Shopping feature. “I built my business on social media; it’s where my fans go first to look for what’s new from Kylie Cosmetics,” Kylie Jenner said in a statement released by Shopify. “I have so much fun creating TikTok videos, and I love sharing posts of my fans using the products. That’s why I’m excited for Kylie Cosmetics to be one of the first to let customers shop directly on our TikTok!”

Social Commerce is on the rise; not only at TikTok

Social Commerce is one of the fastest growing channels for merchants. TikTok and Shopify first announced their partnership in October 2020, with the introduction of new tools that allow Shopify merchants to create and manage TikTok campaigns. With TikTok Shopping, the social video platform makes another strategic move in the direction of social commerce, hoping to attract new customers. And TikTok is not alone. Nearly all major social media companies such as Facebook, Instagram, Pinterest or WhatsApp have invested in their in-app shopping features in recent years. So it was only a matter of time before TikTok followed suit.

“Creators are paving the way for a new kind of entrepreneurship where content, community, and commerce are key,” said Harley Finkelstein, President of Shopify. “By enabling new in-app shopping experiences and product discovery on TikTok for the first time, Shopify is powering the creator economy on one of the fastest-growing social and entertainment platforms in the world. We are excited to help this next generation of entrepreneurs connect with their audiences in more ways – and with TikTok as a visionary partner.”

Currently, the TikTok Shopping feature is only available to Shopify merchants in the US, UK, and in the coming weeks a selected group of merchants in Canada. The roll out to additional regions is expected in the coming months, according to TikTok and Shopify.