One layout – Many languages

A catalogue in English, Spanish and German. A brochure in different languages for the international market. Publications in different languages are nowadays not uncommon in layout design.
Appropriate layouts can be created in Adobe InDesign with the use of different layers. This approach is particularly advantageous for publications whose layout, used design elements and text positions are identical in each language.

At the beginning of the document is completed in one language. In this process it is particularly important to create a suitable layer structure.
Fixed layout and design elements that are identical in each language version are created at a layout layer. These include, for example, images, graphics, logos, backgrounds, coloured areas and also page numbers. At this layer, the basic layout of the document is designed. All texts, tables, legends etc. in the base language are layouted at a separate language or text layer. Based on this structure, the entire layout is completed in one language. 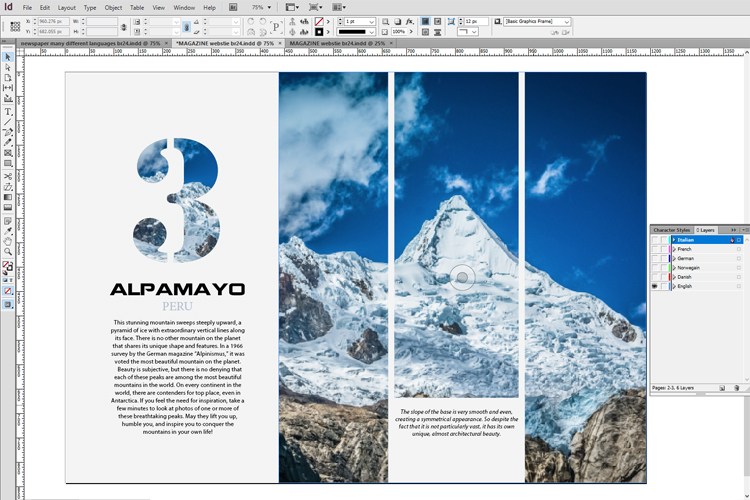 In the next step, the different language versions are created. For this purpose, a language layer is created for each language and the already created layout of the base language is duplicated for all the other languages. The result is a document with various language layers. Basically there are no limits to the numbers of languages. And, for example, catalogues or documentations with more than 20 language layers are no problem.
Each language layer can now be edited individually and all texts can be created in the respective language. Locking all other layers prevents inadvertent modifications. 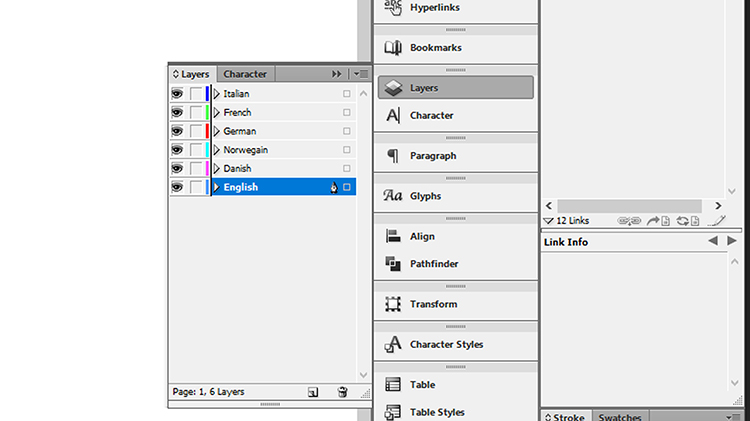 Grammar, spelling and characters are different in each language. Therefore, it is imperative to define language specific paragraph and character styles for each language. Among other things, this ensures a correct hyphenation, spell checking and text wrapping. In addition, they are necessary to generate language-related tables of contents.

The created layout contains a layer with the basic layout. And several language layers with all texts. The resulting document can be edited very fast.
Layout changes must be made only in one place, on the layout layer. Images, graphics, logos etc. can quickly and easily be edited, exchanged and controlled. The same applies to the different language versions. Possible sources of errors are minimized or excluded from the start. Adjustments can be implemented quickly. And further language versions can be realized within a short time.

With effective layout design we present all of your content in any language. From expressive images through image editing to the comfortable data coordination via the DALIM soft proof system – For best results we combine our entire range of services.

Bring your international visions to life – With layout design from Br24!